Last night I decided to cook a risotto to go with the shellfish I was cooking. I have done this in the past usually using white wine, lemon, rocket and parmesan to flavour the risotto. Alas I had no white wine, no lemon and no rocket, though I did have a block of parmesan to hand. Little piece of advice here, never buy pre-grated parmesan this is usually  grated from dried out pieces of old parmesan or so an old Italian friend of mine once said. Though as it is usually cheaper than the solid stuff I am inclined to believe her! So there I was cooking this risotto and wondering how I should flavour it. Well I had mushrooms and they always work well in risotto, I had some red wine, and I had some chicken stock. There we go, good to go, or so I thought.

Basically it didn’t work quite as well as I hoped. Firstly it came out a grey lilac colour rather than the rich red brown I was expecting. Well that was down to the red wine, lack of dark stock and the mushrooms. Secondly it was rather bland, it had no bite. I think it could have done with a splash of balsamic vinegar.

Most of it was eaten so either we were hungry or it wasn’t half as bad as it looked.

Having said that, the scallops wrapped in pancetta were delicious.

I quite like Bella Italia, yes I know it is a chain and they use a range of pre-made ingredients in their cooking and it’s all systems and less about flair and passion. Even having said that compared to other places I enjoy the food, the service, the atmosphere and the Italian’ess.

I was there on Monday for lunch and had an enjoyable meal. I started with the calamari and unlike other places which serve pre-cooked rubbery squid rings, at Bella Italia they do use the whole squid. However they do seem to overcook it, it would  be much better if they cooked for half the time that they do. Still nice, but not how I like it. It arrived with lemon and mayonnaise.

I had pizza for my main course, a Quattro Stagioni, the four seasons; pepperoni, smoked ham, roasted mushrooms and artichokes. It was quite nice, I prefer the pizza from Pizza Express, but this is so much better than the pizzas you can get in other (so-called) pizza eateries. The smoked ham was too salty for me, so that went off, but the mushrooms and artichokes were done well. The pizza base was just right, thin and not too crispy or too soggy. The tomato sauce was slightly too salty, but did taste of tomates. I would have liked a little more cheese.

The pasta dish ordered by my other half was very nice as well, Penne Funghi Pancetta. which was pancetta bacon, mushrooms and penne pasta sauteed in a creamy cheese sauce.

We had soft drinks and left before we could have coffee as we were pushed for time.

The service was fine, though it did take a little time for our main courses to arrive, and it felt like they had been waiting for a while.

Overall it was a nice place for lunch and I would make a return visit.

Tonight I had a very nice spanish chicken dish (that was cooked for me). Containing tomatoes, mushrooms, onion, potatoes and chicken and cooked in a single pot, it was delicious. The main seasoning was freshly ground black pepper which to me gave it a very spanish feel, as did the potato.

This is a dish I made. 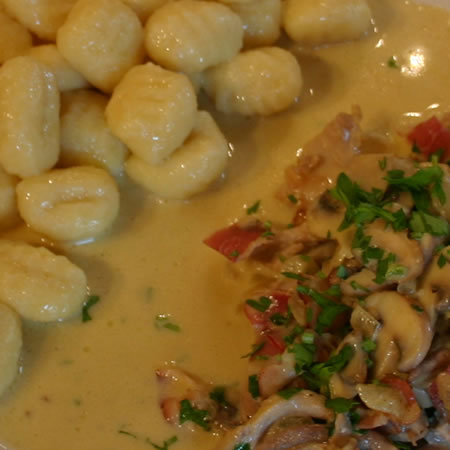 Brown the chicken in the pan, then remove.

Add chopped onion and red pepper to the pan.

Cook on a low heat until soft.

Meanwhile soak some saffron in a little hot water.

Once the mushrooms, onions and red pepper are cooked, add the chicken.

Add a couple of large spoonfuls of creme frache, you could use double cream, but I prefer creme frache.

Serve with some freshly cooked gnocchi.

A variety of bruschetta with cheese, tomatoes (fresh and sun-dried), artichokes and mushrooms. 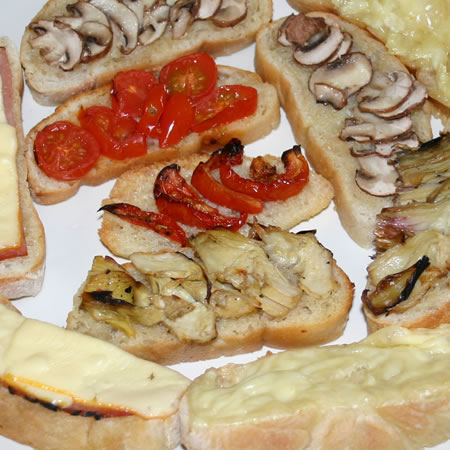 Start off with a ciabatta, though in theory you could use a baguette or french stick (and I have done so).

Butter one side only.

Bake in a hot oven for less than ten minutes.

In an pan of boiling water add the linguine. This will take 11 minutes to cook, but check the packaging to be sure. No need to add salt or oil to the boiling water.

In a pan, heat some olive oil.

Add some cubed pancetta and a finely chopped onion,

Cook until the onion has softened.

Once the mushrooms are cooked (how long this takes depends on the size of the pan, how hot it is and the quantity of ingredients) add creme frache and a few strands of saffron.

Stir on a low heat until the saffron has imparted a golden tinge to the cream mixture.

You could use cream instead of creme frache, I use creme frache as I like the flavour. You don’t need to use saffron, but it adds a wonderful flavour as well as colour to the dish.

Once the linguine is cooked, drain, add the cream mixture, a handful of grated parmesan, a good twist or two of ground black pepper. 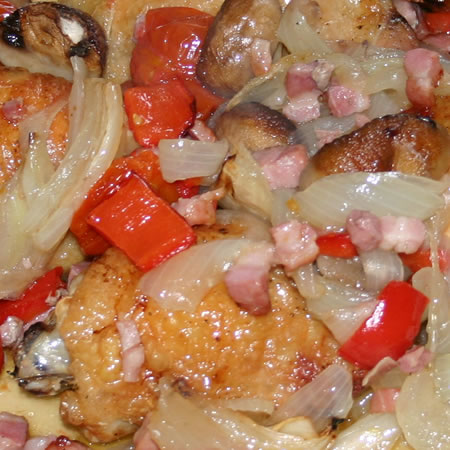 Roast in an oven.

Half way through cooking add onion, pepper, pancetta and mushrooms.