Now as we enter a second lockdown I have been reflecting on some meals I had out over the last few years which never made it to the blog. Sometimes I just run out of time to write up a review and sometimes I forget to write up the meal.

I had the meal reviewed here in June in 2019 at Belgo in London. I had spent a week off on holiday in Sussex and the week after I was back to work with three days in London. It was at the same time a certain American President was also visiting London during these same three days! I had written up the delicious pasta meal that I had during the same trip.

During my three days I was staying in a hotel that I actually wasn’t expecting to stay in, so I hadn’t had the time to do much research about places to eat nearby and I really didn’t want to end up at the hotel restaurant, as they can be terrible food and over-priced. After checking into the hotel I had a look around the area to see where I could get some food. I had been tempted by the Union Tavern gastropub, but it was rather busy. Around the corner was a branch of Belgo. I had always liked the concept of Belgo, but there wasn’t one in Bristol so I had never managed to get to a branch. I had thought about visiting the one in Kingsway when I was looking for lunch when I was working in our London office, but it was a little too far away (and too expensive) for lunch. So the opportunity of visiting the Islington branch was appealing.

I quite liked the interior, modern and somewhat abstract. Part of me thought that a more nostalgic Belgian environment might have worked. I was given a warm welcome from the waiting staff and was shown to my table.

There was quite a wide choice on the menu, but my main reason for going to Belgo was the mussels.

To drink, I went with a Beer Flight. This is three small 1/3 pints of different beers. A lovely idea if you have no idea on which beer to choose. I really enjoyed the different beers, each quite unique, all refreshing.

For my starter I went with the Calamari, crispy squid with aioli. 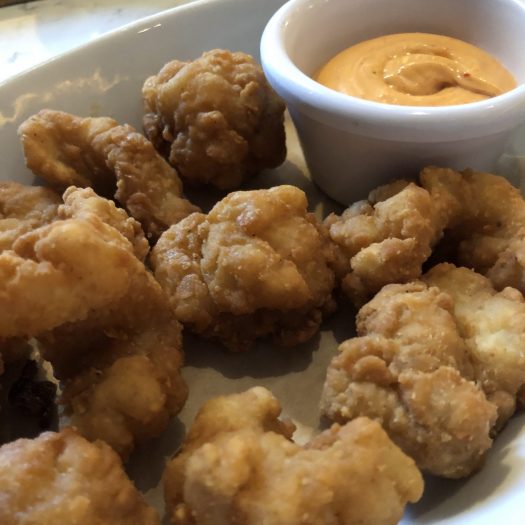 This was not as good as I was hoping, but even so it was okay.

For my main course I went with Green Thai Mussels. These were mussels cooked in a Thai Green sauce with coconut cream, fresh ginger, lemongrass, Kaffir lime, chilli and coriander. I did think about going with the traditional or mariniére bowls, but thought that was the way I would always order, so lets go with something different.

I really enjoyed the mussels, the Thai sauce was nice, spicy but not overpowering.

The service was excellent and I did not feel rushed or ignored.

Since I visited we’ve had the covid-19 pandemic. In July 2020 on the back of the pandemic and the parent chain, Causal Dining Group went into administration and it was announced that Belgo would permanently close three of its four sites. It looks like I will need to find a different place to have some mussels.