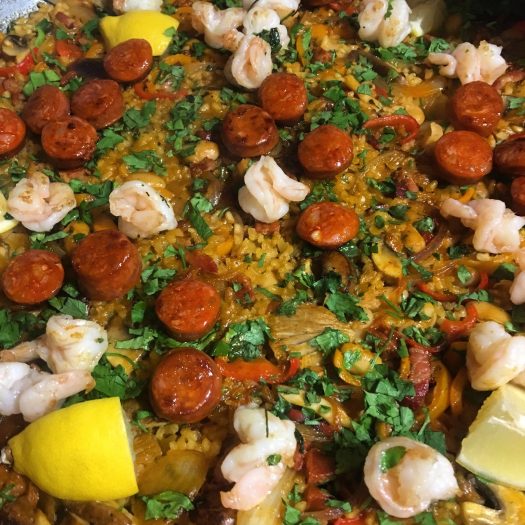 I do like a good paella, though I have been told a fair few times that what I cook and call paella, isn’t paella.

That I get, I am not trying to cook an authentic Spanish version of paella, but one that we like and find tasty. I have been cooking this dish for a fair few years, but got told once by a Spanish person that what I was cooking wasn’t authentic paella, which is correct, so I normally describe this as a Spanish inspired rice dish.

To make this paella I took my large paella pan added a splash of olive oil.  I then  added some pancetta, diced onion and sliced red pepper. This is then cooked off slightly before I added some mushrooms. Once the onions are softened I add the paella rice and stir it into the onions and peppers. I added a paella mix from Waitrose, but you could, of course, use your own spices, herbs and saffron. I then added some stock.

In a separate pan I cook the sliced cooking chorizo and add this to the paella when it is nearly cooked. I do a similar thing with the butterflied prawns.

I then finish off with finely chopped parsley and some lemon.